Signing agreement with Tadweeer to recycle electronic and electrical waste 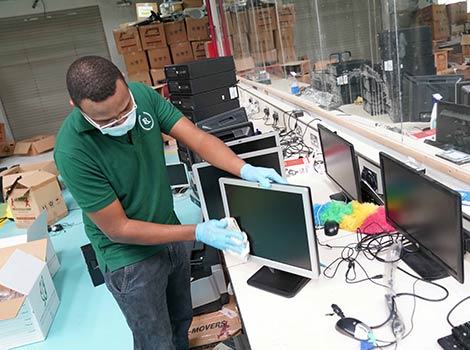 Nasser Al Dueb praised RTA’s efforts to conserve the environment and its effective contribution to the Circular Economy. “Through the signing of this agreement, we intend to achieve environmental sustainability by recycling electronic and electrical waste generated by RTA in accordance with the integrated waste management strategy. We aim to encourage innovation in the recycling and converting of waste into energy, and support in migrating from the landfilling to the recycling of waste,” said Nasser Al Dueb.

“The recycling of electronic and electrical waste at Tadweeer is carried out in a highly controlled and accurate environment according to the approved international specifications and environmental requirements. The process is also compatible with the local requirements and regulations issued by the competent authorities," Al Dueb added.

Tadweeer adopts safe environmental solutions for the recycling of electronic and electrical wastes by adopting the approved international standards. The company is certified by ISO in quality, environmental health, and occupational safety (ISO 14001, ISO 9001, ISO 45001). By processing these wastes through advanced techniques driven by artificial intelligence, raw minerals are extracted through chopping, separating and sorting them so that the final deliverable is a high-purity metal that can be reused in the industry. Thus, the recycling companies are considered the Second Mine to supply the industry with ore.