Start of operation of e-scooters in 10 districts 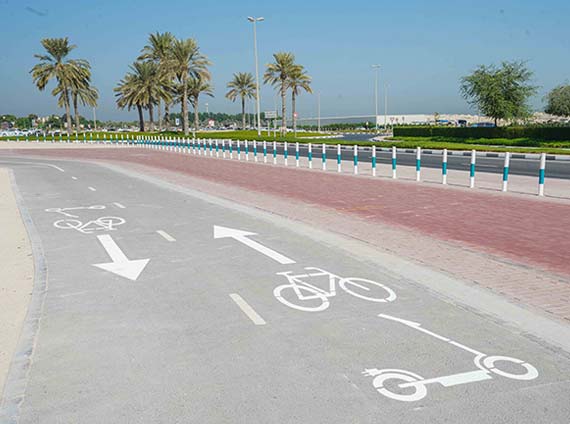 Dubai’s Roads and Transport Authority (RTA) and the General HQ of Dubai Police announced the start of operation of electric scooters on permitted cycling tracks in 10 districts across Dubai starting from Wednesday, April 13, 2022.

The step is taken in line with Resolution Number 13 for 2022 endorsed by His Highness Sheikh Hamdan bin Mohammed bin Rashid Al Maktoum, Crown Prince of Dubai, Chairman of the Executive Council, regulating the use of scooters in Dubai. It supports the efforts to make Dubai a bicycle-friendly city and culminates the huge success of the trial operation of the e-scooter that started in October 2020.

“The selection of these districts was guided by specific criteria, such as high population density, special development areas, areas served by public transport and metro stations, the availability of integrated infrastructure, and areas with a high level of traffic safety.
“The joint operation of e-scooters on the specified districts is restricted to four companies; two international (Tier and Lime) and two local (Arnab and Skurtt), which will deploy at least 2000 e-scooters. The selection of the four operators follows their success in the trial phase and the achievement of a customer satisfaction rating as high as 82%. The results of the trial operation proved the suitability of e-scooters as individual mobility means for short journeys as well as first and last-mile journeys.

“About 500,000 journeys were made until the end of 2021. By the end of April 2022, RTA will launch through its website a link enabling interested individuals to apply for free to obtain permits for riding e-scooters on safe roads identified by RTA. The process involves attending training courses and passing an online test,” explained Al Tayer.

Al His Excellency Lieutenant General Abdullah Khalifa Al Marri, Commander-in-Chief of Dubai Police, praised the issuance of the Executive Council’s Resolution No. 13 for 2022 by His Highness Sheikh Hamdan bin Mohammed bin Rashid Al Maktoum, Crown Prince of Dubai, Chairman of the Executive Council, regulating the use of bicycles and electric bikes and scooters in Dubai. “The Resolution will encourage the use of electric bikes and scooters in mobility. It cements the government drive to rank Dubai as a bicycle-friendly city, considering bikes safe and eco-friendly mobility means over short distances,” said Al Marri. He confirmed that they were working with RTA and strategic partners to realise the strategies of the Dubai Government. He praised the efforts of the concerned departments at the Dubai Police to enforce the implementation of safety and security stipulations, and ensure compliance with the relevant laws and regulations.

“Dubai Police is keen to ensure the compliance of road users with the applicable rules in line with the policy aimed to make Dubai the ideal place for living and doing business, the favourite and safest destination of visitors, and the city with the least carbon footprint worldwide. The step also contributes to realising the UAE Energy Strategy 2050. It is our duty in Dubai Police to control the road, and ensure that cyclists, e-scooter riders and users of all other mobility means comply with the safety conditions to protect them as well as others against the risks of roads,” added Al Marri.

The Resolution No. 13 for 2022 of the Executive Council stated the technical specifications applicable to the e-scooter and bike, which include a white headlight, red and reflective light on the rear, horn fixed on the steering arm (T-bar), brakes on the front and back tyres, tyre size must be proportional to the size of the scooter, roadworthy tyres for the tracks specified by RTA, and the size of the scooter must be proportional to the size of its rider. In this regard, RTA calls on the public to select high-quality e-scooters to avoid battery burn accidents and frequent technical malfunctions.

The Resolution has set several obligations on the part of the e-scooter/bike highlighted by the compliance with the traffic regulations and riding the e-scooter owned by individuals and companies or rented for personal purposes only within the permitted areas and tracks declared by RTA. They must not ride scooters on tracks designated for walking or running. They have not to exceed the speed specified limits fixed by RTA for those tracks, and avoid riding any other type of scooters specified by RTA on safe roads without obtaining a driving permit.

RTA will launch an awareness campaign to educate scooter riders about the regulations, and designated locations for use as well as the importance of obtaining driving permit for e-scooter through RTA’s online platform. Obtaining this permit shall be a prerequisite for permitting the riding of scooters on safe roads in the announced areas. However, holders of vehicle driving licenses, international driving licenses or motorcycle driving licenses are excluded from obtaining such a permit.

The Resolution specified the obligations of the e-scooter rider to ensure full compliance with RTA’s security and safety requirements. They include wearing reflective vests and helmets, avoiding carrying riders on bicycles and electric bikes unless the bikes have separate seats for them, avoiding pillion riders or anything that causes an imbalance of the e-scooter, and maintaining a safe distance from other vehicles and pedestrians.

It also states that cyclists should not use their e-bikes on roads with a speed limit of more than 60km per hour, and stick to safe driving and public safety conditions. They have to be cautious and refrain from actions that pose risks to the life and safety of the cyclist or others, such as hooking to a vehicle while biking, zigzag or one-handed cycling, unless for hand signalling.

The Resolution called for reporting any incident sustained or caused by the rider that results in injuries or material damage through the specific phone numbers of the Police, Ambulance or RTA unless evidence is provided for the inability to report. Cyclists and bikers should always ride on the right side of the road. Before changing their lane, they should give hand signals and ensure they can make their move safely. They should always ride in direction of traffic rather than in the opposite direction. They should ensure the soundness of speed gears, brakes and tyres. Flashing and steady lighting should be used as per RTA’s requirements. Bikes should not be towed by any vehicle and the bikes themselves should not be used to tow other objects. Making major modifications to the bike is also not permitted.

According to the Resolution, cyclists below 12 years should be accompanied by an adult cyclist who is 18 years or older. Riders below 16 years are not permitted to ride an electric bike or electric scooter or any other type of bike specified by RTA. A driving permit is essential to ride electric scooters.

RTA applies top international practices in developing the infrastructure to match the use of sustainable and flexible mobility means while sticking to the highest standards of safety and security. It provided signs along the cycling tracks and areas that include instructions and guidance for riding electric scooters. The smart apps developed by operators include permitted lanes, and safety rules to be adhered to.

Parking of scooters of operators

RTA has provided parking spaces for shared electric scooters along the designated tracks and permitted areas. They are mainly in key tourist attractions, and around public transport stations. The aim is to encourage residents and visitors to use electric scooters on first and last-mile trips, meanwhile maintaining the gorgeous outlook of the emirate.

RTA called on cyclists to park the shared electric scooters of operators in the designated parking spaces only. Parked scooters should not block the movement of traffic and pedestrians or the use of public parking. It urged them to avoid violating the conditions and regulations provided for in the Resolution and decisions issued thereby. The Resolution states that the parking of the bike or electric scooter in other than the designated parking spaces in a way that may obstruct the movement of vehicles or pedestrians, or pose risk to road users, will result in a fine of 200 dirhams.