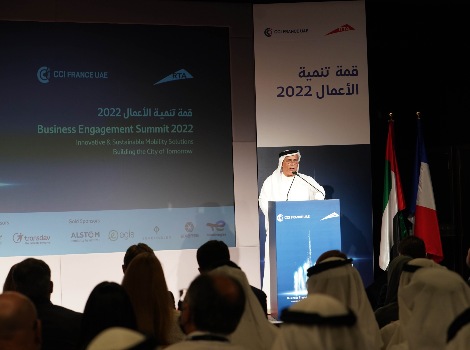 His Excellency Mattar Al Tayer, Director-General, Chairman of the Board of Executive Directors of the Roads and Transport Authority (RTA) opened the 4th Emirati-French Business Engagement Summit held under the theme: Innovative and Sustainable Mobility Solutions, Building the City of Tomorrow at the French Pavilion, Expo 2020 Dubai.

Attendees included His Excellency Xavier Chatel, Ambassador of the Republic of France to the UAE, Nathalie Kennedy, Consul-General of France in Dubai, Geoffroy Bunetel, President of CCI France UAE. About 20 companies among the leaders in mobility and innovation took part in the summit.

Al Tayer was delighted with the opening of the fourth summit which succeeded in the previous editions in boosting the commercial and investment cooperation between RTA in Dubai and the French business community. He noted that the summit had cemented the bilateral relationships in a variety of aspects that include driverless transport, future of mobility, innovative project financing and big data.

Al Tayer also paid tribute to the French companies that had undertaken a host of key RTA projects citing examples such as the Enterprise Command and Control Centre for Roads and Transport Systems (EC3), the extension of the Red Line of the Dubai Metro to the site of Expo (Route 2020), and the contract with Keolis-MHI Consortium to operate and maintain the Dubai Metro and operate the Dubai Tram.

RTA has an ambitious plan that extends up to 2030 for uplifting roads and public transport means in Dubai to achieve the vision of His Highness Sheikh Mohammed bin Rashid Al Maktoum, Vice-President, Prime Minister of the UAE, Ruler of Dubai, to make Dubai the best city for living in the world, and realise the objectives of the Dubai Urban Plan 2040.

“RTA’s plan includes boosting the Public-Private Partnership (PPP) in funding and constructing the transport infrastructure in accordance with the law regulating the PPP in Dubai. Accordingly, RTA has concluded a study for undertaking a portfolio of projects under the PPP model costing more than AED 5 billion. We are planning to study further 12 projects up to 2025 costing more than AED15 billion. The list includes mega projects such as the extension of the Dubai Metro network, suspended mobility pods, and the autonomous air taxi,” revealed Al Tayer.

“RTA has a history of undertaking pioneering experiences and practices in conjunction with the private sector in the construction of a variety of roads and transport infrastructure projects. On top of these is the partnership with Careem in providing e-hail taxi service, and e-bike rental service. RTA has also joined hands with Cruise Company to operate Origin autonomous vehicle to provide taxi and e-hail ride services, thus rendering Dubai the first city outside the USA to operate these vehicles worldwide. RTA is also teaming with the private sector in the construction and installation of more than 1500 shelters for waiting bus riders in several points across the emirate. Examples of PPP projects also include the development of three comprehensive rest-stops for trucks and four multi-level parking terminals.

His Excellency Xavier Chatel, Ambassador of the Republic of France to the UAE expressed his deep delight with the staging of the 4th Emirati-French Business Engagement Summit, which signals the solid cooperative relationships between France and the UAE.

“We are proud of the strong partnership between RTA and French companies along RTA’s journey to develop the infrastructure for smart and sustainable mobility with leading rail companies such as Alstom and Thales, which were part of the Expolink Consortium that had undertaken the construction of Route 2020 project to extend the Dubai Metro Red Line to the site of Expo 2020. It is also satisfying to see the current collaboration between Keolis and Mitsubishi in operating and maintaining the Dubai Metro, and operating the Dubai Tram,” commented the Ambassador.

Bernard Tabary, CEO International, Keolis Group said: “The Emirati-French Business Engagement Summit is a fantastic opportunity for the leaders and senior executives of French companies to meet with His Excellency the Director-General and Chairman of the Board of Executive Directors as well as senior executives of RTA to share views about innovation in mobility, shared & sustainable transport and projects that RTA is considering to roll out in future.”

Geofroy Bunetel, President of CCI France UAE, said: “The summit offers an opportunity to France and the UAE to explore and establish partnerships in urban transport. The exploration of innovative and sustainable mobility solutions is extremely important for planners in any city.”