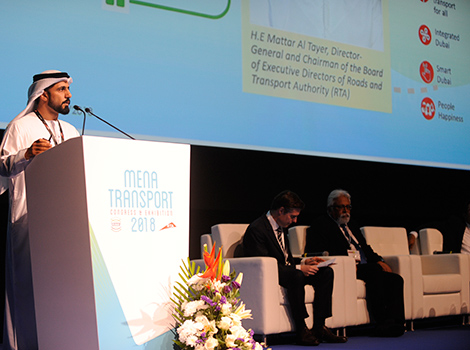 One of the sessions of the MENA Transport Congress & Exhibition explored the use of information and technology in improving public transport services. The session was moderated by Gerome Borbex, Director, Regional Offices and Services, UITP, Belgium, and six other participants from Hong Kong, UAE, Germany, Canada, France and Turkey.

Alok Jain, Director General of Trans-Consult, Hong Kong, started the session by delivering a working paper entitled: (Use of telematics data in improving delivery of bus services and its role in improving services to public transport riders in Hong Kong).

Mohammed Al Khayatt, Director of Smart Services, RTA delivered a paper entitled: (Shaping the Future of Public Transport - Dubai Integrated Mobility Platform - S’hail App). He shed light on S’hail App; the latest smart apps of the RTA that comprises all transit means of Dubai as well as the milestones of the RTA. The paper also touched on the record achievements made by the RTA including smart apps, which have contributed to raising the profile of Dubai.

The third work paper was entitled (Getting connected - how digitalisation is changing the mass transit business) and was presented by Melih Arpaci, Siemens AG Mobility Management. It covered several aspects focusing on the importance of digitalisation in automating public transport technologies, especially as Siemens is one of the leading companies in this field among others. Mohab Abla, Account Manager, GIRO, delivered a paper entitled (Leverage data to improve customer experience) focusing on the importance of data in improving this experience.

The fifth paper was entitled (How Big Data and Artificial Intelligence can improve the operational performance of public transport) and was delivered by Guilaume Martinett, Chief Data Office, RATP Dev, France. He stressed the importance of data considering it the petroleum or gold of the 21st century.
The sixth and final work paper was entitled (Istanbul Metrobus Capacity Increase Project) and was delivered by Ms Bushra Boran. She reviewed the importance of Istanbul city as the business capital of Turkey and its huge population as well as visitors from all countries of the globe. Such circumstances, she noted, warrant the provision of an integrated and automated transit system built to the highest international standards.

We are here for you. Do not hesitate to communicate with us via the following channels: