(The service will double to 1,750 bikes at 175 bike stations; becoming the first completely pedal-assisted docked bike-share initiative in the world) 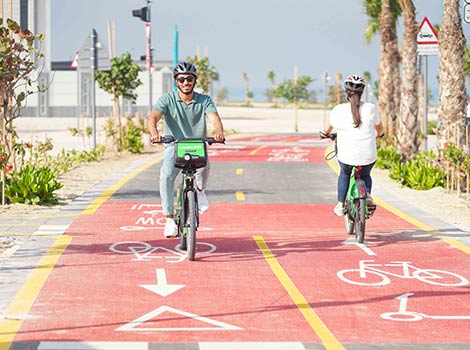 Dubai’s Roads and Transport Authority (RTA) and Careem launched Phase II of bike rental service (bike-share) by adding 950 pedal-assisted e-bikes (bikes operated by pedals and kinetic energy), and 95 stations, which will bring the total number of bikes in Dubai to 1,750 bikes at 175 stations. Thus, it has become the first completely pedal-assisted docked bike-share initiative in the world. The step is part of a multi-stage scheme to deploy 3500 bikes at 350 docking stations across Dubai.

His Excellency Mattar Al Tayer, Director-General, Chairman of the Board of Executive Directors of the Roads and Transport Authority expressed his delight with the huge success of the joint venture between RTA and Careem for rolling out Dubai’s bike-share service. Al Tayer was also pleased by the growing habit of cycling as a sport and using bikes as an alternative and sustainable mean of mobility, which contributes in realizing the first and last-mile journey strategy.

“The initiative supports the vision of His Highness Sheikh Mohammed bin Rashid Al Maktoum, Vice-President, Prime Minister of the UAE, Ruler of Dubai, to make Dubai the best city for living and to make people happier. It also supports the directives of His Highness Sheikh Hamdan bin Mohammed bin Rashid Al Maktoum, Crown Prince of Dubai, Chairman of the Executive Council, to transform Dubai into a bicycle-friendly city, which requires uplifting the infrastructure and adopting the top international practices,” added Al Tayer.

“The bike-rental service advances the sustainability of Dubai and encourages residents and tourists to practice cycling on the 527 km long cycling tracks spread all over Dubai. It also supports RTA’s effort in boosting the integration of mass transit means by promoting flexible car-free mobility trips, and safely integrating them with daily means of transportation. Thus, it serves the overall objective of reducing the use of private vehicles and switching to the use of other more sustainable means of transportation. The step will support the Dubai Government's efforts to reduce the consumption of energy and pollution, and provide a healthier and happier environment as well as short-haul services (first and last mile) that helps public transport riders reach their final destinations.

Bassel Al-Nahlaoui, Managing Director of Mobility at Careem, said: “We are expanding Careem BIKE in response to the incredible demand we have seen for micro-mobility transport across the UAE. More and more people are choosing to travel by bike, for work or leisure, and we are incredibly proud that Careem BIKE is doubling in size to become the first completely pedal-assisted docked bike-share initiative in the world. These efforts will contribute to the transition towards sustainable transport.

Careem BIKE became the first bike-sharing scheme in the Middle East following Careem’s acquisition of the local company Cyacle. Today it is the official micro-mobility partner at Expo 2020, offering a quick and sustainable way to travel around the world fair.

Careem uses sophisticated smart systems for tracking and predicting high-occupancy areas. It also introduced solar-powered bicycle docking stations and manages rentals via the Careem BIKE app enabling customers to unlock the bikes by scanning the QR code on the bike or entering the 5-digit code from the app at the bike docking station.

Residents and tourists can access pedal-assisted bikes through the Careem BIKE app as well as through purchasing as Careem BIKE daily pass (AED 20), weekly pass (AED 50), monthly pass (AED 75), or annual pass (AED 420, which works out to less than AED 2 per day).

The service covers many busy areas such as the Marina, Jumeirah Beach, JLT, The Greens, Dubai Canal, Dubai Media, Downtown Dubai, and Al Qudra as well as safe streets in Al Karama and Al Mankhool. RTA has set the speed limit of bicycles in the emirate at 30 km/h on the designated cycling tracks for amateurs, and 20 km/h on private tracks or tracks shared with pedestrians within urban areas. The speed is unspecified speed on training and professional tracks, such as Al Qudra Cycling Track, as part of RTA’s focus on the safety of pedestrians and cyclists.

As part of its commitment to the safety of the beneficiaries of the bike rental service, RTA called on bicycle riders to use the designated tracks, and to abide by the applicable laws and regulations in the emirate, especially the Executive Council’s Resolution No. (10) of 2015 and the Executive Regulation No. 468 of 2019, which prohibit riding bikes on roads with a speed limit of 60 km/h and above. Such rules order the rider to get off the bicycle, while crossing pedestrian crossings, wear a protective helmet and a reflective jacket, sit on the seat fixed to the bicycle, drive on the right side of the cycling track, avoid holding any moving vehicle or trailer while cycling, and avoid leaving bicycles in a way that obstructs vehicles or pedestrians.