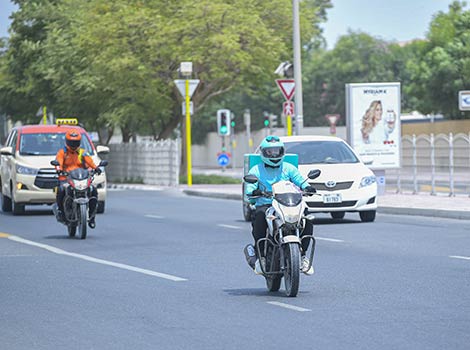 Dubai’s Roads and Transport Authority (RTA) and the Dubai Police General HQ announced the launch of a joint awareness campaign targeting the delivery service sector under the #It_Can_Wait. The campaign is part of joint efforts of the two entities to reduce motorbike accidents, which soared by 33% from 300 in 2020 to 400 in 2021.

The campaign, which features the participation of mega delivery service companies in Dubai, aims to alert delivery motorbike riders about road safety standards and urge motorists to be more attentive to other road users, especially delivery motor bikers. It also seeks to promote public awareness and encourage community members to cooperate in reducing the rate of traffic incidents and related casualties.

Abdulla Yousef Al Ali, CEO of RTA’s Licensing Agency said: “Through this awareness campaign, we intend to reach the largest possible segment of the society   and educate them about the practices that ought to be complied with while driving vehicles and motorbikes. Undoubtedly, achieving traffic safety is a shared social responsibility that requires the concerted efforts of the community as a whole. We, at the RTA, commend the key role of the Dubai Police General HQ, delivery companies and social media influencers in achieving the goals of this campaign.

“We call on the public to be patient and demonstrate a spirit of responsibility. Hassling delivery riders from delivery companies tends to distract their concentration during the journey, which may result in serious accidents for the biker or other road users. RTA has updated the regulations related to the delivery service business to achieve the highest safety levels in accordance with best international standards,” added Al Ali.

RTA worked closely with the Dubai Police and partners from the delivery service companies to chart a regulatory structure and an operational manual. This campaign aims to ensure the sustained growth of this vital sector, which will also enhance Dubai’s competitiveness globally.

Colonel Juma Salem bin Suwaidan, Deputy Director of the General Traffic Department, reiterated the keenness of the Dubai Police General HQ to promote the strategic cooperation with the Roads and Transport Authority to enhance the traffic safety and undertake joint awareness programmes. “The two entities will join hands to raise the awareness on safety and security stipulations of delivery service bike riders. In this regard, coordinative meetings will be held, and joint awareness efforts will be made to serve the common objectives of lowering the number of traffic-related injuries and fatalities,” he added.