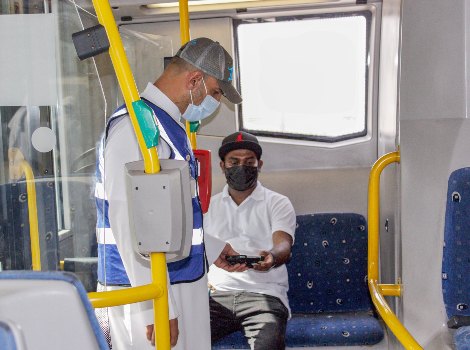 “The first inspection operation was made during 19-28 February 2022 year, in conjunction with the General Department of Airports Security to monitor the activity of transporting passengers on unlicensed vehicles. It resulted in the issuance of 52 violations at the Dubai Airport Terminal 2,” said Saeed Al Balushi, Director of Passenger Transport Activities Monitoring at Public Transport Agency, RTA.

“The second practice relates to offering passenger transport service, whereby the lift service is promoted as though it is a public transport service either through face-to-face or via social media and various electronic platforms,” added Al Balushi.

“The second inspection operation was coordinated with the General HQ of Dubai Police and the General Department of Residency and Foreigners Affairs, to foil attempts of evading the payment of public transport tariff. About 62,919 operations were carried out from 14 to 20 March2022, which resulted in the reporting 1,047 violations,” added Al Balushi.

RTA is keen to run regular inspection campaigns in conjunction with the concerned bodies to ensure effective monitoring of various passenger transport activities in Dubai, and curb violations and negative attitudes.